Everything You Need to Know About Rapid Prototyping in Product Development

The most crucial part of the engineering design process is prototyping. In the past, however, prototyping is a bottleneck. Why is it so? Because traditionally, engineers and product designers have to create improvised proof-of-concept models using basic tools and functional prototypes are often made in the same way as the finished product. These models are made by conventional manufacturing processes like CNC or injection molding, which need costly setup and tooling. Low volume production and custom prototypes are exorbitantly expensive.

The introduction of rapid prototyping enables companies to convert their ideas into tangible proofs that their concepts are feasible. It also advances the concepts to functional prototypes that look and function as much as the final product. Additionally, it steers the products into a series of validation processes until the final production.

With the use of rapid prototyping, engineers and designers can make prototypes out of the CAD data faster than before, while allowing revisions of the designs based on testing results and feedback quicker.

What is Rapid Prototyping?

Rapid prototyping is a group of methods used for quick fabrication of a scale model of a physical part or product by employing computer-aided design (CAD) data. Most of these parts or products are manufactured using additive techniques. These techniques are the opposite of the traditional prototyping methods like CNC, which is subtractive in nature. This is also the reason why the term rapid prototyping has become synonymous with 3D printing and additive manufacturing.

The method of additive manufacturing is compatible with prototyping because it allows unlimited forms, does not require tooling. Rapid prototyping can make parts out of materials that traditional manufacturing methods used. 3D printing technology is not new. It has been around since the 1980s; however, because of its cost and limited complexity, only large companies can afford to use it. Some companies outsourced them, but it took them weeks to make iterations.

When desktop and benchtop 3D printing was introduced, it has changed the use of rapid prototyping. Now, most product developers and companies are adopting the technology. With an in-house 3D printer, designers and engineers can quickly make iterations between designs and prototypes.

Creating prototypes of varying design, shape, and sizes can be within a day which facilitates faster real-life testing and analysis. As a result, rapid prototyping has helped companies to have better products and have these products reach the market faster. 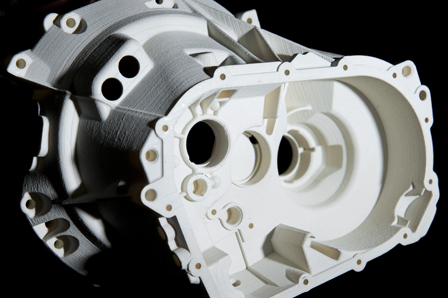 Realize and analyze the ideas faster

Rapid prototyping has allowed ideas to transform into proof-of-concept, ready for exploration at low risk. It helps the product designers to go past virtual visualization quicker. It is easier to analyze with a real look and feel of the concept and compare it with the idea.

It allows effective communication of the concept

A physical model gives the designers confidence to discuss their ideas with their clients and stakeholders, which may not be possible with virtual models on screen. Rapid prototyping also allows the facilitation of feedback, which is essential for the designer to improve the design.

Instantly do changes and designs iterations

Designing is a repetitive process, and it requires multiple testing, evaluation, and revisions before reaching to the final production phase. 3D printing provides the flexibility to create prototypes faster, and integrate the changes instantly, hastening the trial and error process.

It saves cost and time

Because 3D printing, there is no need for setup and tooling, which are all costly. It uses the same equipment even with complex geometries. When the 3D printer is in-house, it eliminates the cost of outsourcing.

In product designing, finding the product flaws early on can help the companies to avoid costly design revisions and changes in tooling along the way. Rapid prototyping also helped engineers to test the products and thereby, reducing manufacturability and usability issues before getting into final production.

There are many rapid prototyping methods, and companies can choose between these various solutions that will suit their particular application.

High-resolution 3D printers are the most common, affordable, and easier to use for rapid prototyping. However, advancement in technology has paved the way for different 3D printing solutions. The 3D printing for plastics is now available in three options: fused deposition modeling (FDM), stereolithography (SLA), and selective laser sintering (SLS). To know which technology is suitable for the design depends on the material and the cost and return on investment.