Every single piece of technology in the CNC machining niche uses technology that dates back to quite a few years ago. Even if the mechanisms have been improved and updated, many machines in modern technology wouldn’t be able to be what they are if there wasn’t something to be tampered with in the first place. One of the prominent precursors were numerically controlled machines. Most of them were a big deal in the early XX century. These devices were the ancestors of high-speed, precise multi-axis machining centers that are used all over the manufacturing industry these days. The following is a list of other inventions that helped shape this industry into what it is today:

Automatic Programmed Tools is a computer program created by Douglas T. Ross a team of researchers in the MIT back in 1956. They were looking for ways to position numerically controlled machine tools quickly and efficiently. The method they choose was to combine them with computers. There were early versions of this device used to handle punching cards and other means such as perforated tape to keep track of instructions that required translations by operators.

When big industries such as aeronautics and defense came calling for more sophisticated means to create parts, the industrial machine came calling with substantial funds from the government. The times of war were calling for new methods to get things done, and that’s how the combined efforts of at least 15 corporations brought to life the first machine programming language. The work done here would lay the grounds to create the ANSI standard, G-Code, and the CAD/CAM systems used today.

The recirculating ball lead is one of the most reliable ways to convert rotation into linear movements. Rudolph Boehm created them in 1929, and they are considered the successors of the standardized Acme lead screws used until that moment on manual machine tools. The secret behind ball screws is that they offer very low friction and high levels of accuracy on continuous motions when they are worked from a precision screw shaft.

They are resistant to torque effects of other systems, so the shaft can be turned using mechanics or hand crank. If it’s handled properly, the screw and whatever is mounted on it will be pulled along its length. Ball Lead screws could be protected using flexible dust covers to increase their reliability and decrease their maintenance periods.

These devices were created by John T. Parsons in 1952 since he was the first guy to register the patent. He was working with the MIT and the defense industry to find a better way to make wings for aircraft, and rotor blades for helicopters more reliable. On those days, these machines were created using templates that were really prone to errors. He fixed this issue by using a mathematical point system to handle the movements of a cutter head with more accuracy. 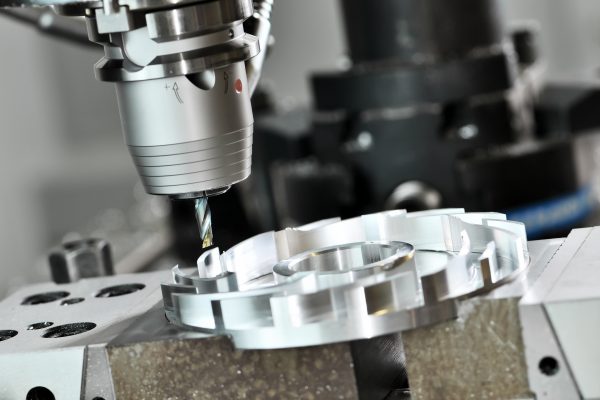 A machine created by a company named Kearny &Trecker in the year 1959, located in Milwaukee. Their innovation used a lot of the earlier developments previously used in other systems by lining them up in a single device. You get everything in a single place: servo motors, ball screws, magnetic tape, and a programming language. All these inventions came together to create the grand-grandfather of modern CNC machining and automated manufacturing that is still used today, albeit bearing more sleeker designs.

Means of storing data is not exactly new. Back in the time of great wars, the sides in conflict required means to keep all the information they got their hands into safely. German inventors were the ones to come up first with very unique ideas to store data using magnetic signals on a conductive medium. Fritz Pfleumer was the one to patent magnetic tape by using oxide bonded with a polymer back in 1928.

The tape made its way to America When in 1945 when a US soldier named John Mullin sized the magneto phone, the then-advanced recording device of the Nazis. These days we use optical discs and flash memory. The first commercially successful CNC machines required magnetic tape to move quite a bit of digital information quickly to make any task practical.

This is one of those inventions that are pretty tricky to research. It’s widely believed they predate the XX century. They are linked to the culmination of work done to create durable and reliable battery technology for electrical conductivity as well as closed-looped feedback systems. The design evolved too quickly and was tampered many times to make it more efficiently as World War closed in. They were mainly used to guide radar and anti-aircraft gun placements.

The basic mechanism of servo motors is to convert rotational movements in linear distance. They use encoders to send electric pulses that offer exact readings of their position. When they are joined with screw shafts on a CNC machines, they turn a fraction of a degree, to help the ball screw move along the axis in the linear distance required. The encoder will display it as readout. This interface is used to translate digital information in physical motion. Every CNC machines still use servo motors to control the positions on every axis.